I have so much to say about my Bonnaroo experience, I thought it best to split it up by day so I don’t end up with some huge mega post that no one actually reads. So ok, here goes nothing!

The Roo Crew: Me, Mike, DW, Jack, Matt, Ben, Kristyn, and Joe (not pictured sadly). These are all Mike’s friends, one of their wives (who is awesome), and another guy’s cousin. Basically, there isn’t a better Roo Crew around. Matt and DW have both been to Roo before, so we relied on them to show up the ropes.

Mike and I drove to meet up with everyone at Roanoke on Thursday night. Ben and Kristyn were awesome and allowed us to crash at their house. We consolidated all our stuff into Ben’s “old man Buick” and drove down together first thing Friday morning. So actually… Ben drove and Kristyn and I slept 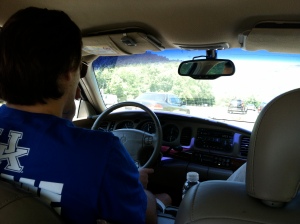 We left at about 7 am and arrived at Roo at approximately 2 pm. These guys had the right idea arriving Friday because there was NO line to get into the camping area, including car inspection and wrist band scanning. We set up camp, had a celebratory beer (or two) and headed into Centeroo. 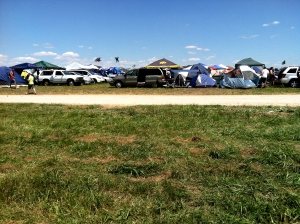 First up was Two Door Cinema Club in the “This Tent”. I’ve not listened to them a bunch, but the guys love them so I was excited. They were AWESOME. I will definitely be listening to them more in the future.

Then we headed over to the main stage (The “What Stage” to be precise) for The Avett Brothers, who are awesome. I really enjoy “January” live.

Then over to the “Which Stage” (the second main stage) to see Feist. Then all the guys promptly passed out on the lawn. This lead all us to refer to napping as “Feisting” or “having a Feist” for the remainder of the weekend (and hopefully the rest of our lives). If someone was tired, they were “feeling Feisty”. 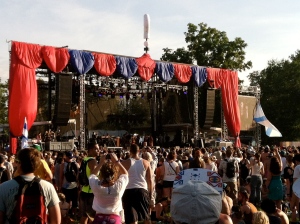 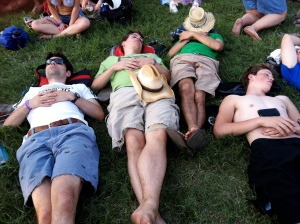 We headed back to the “This Tent” for Ludacris, where I shook my moneymaker but sadly received no paper. We all discussed later how few of his own songs Ludacris actually has. The majority of his set was him singing his portion of other popular songs along with a recording. It was still extremely entertaining though, and I have no complaints.

After this we took a quick break and popped back to our campsite. 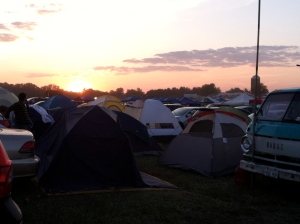 Everyone had a few refreshments before heading back into Centeroo for the evening’s festivities. We caught Foster the People at the Which Stage, and they were so much better in person than I expected!

Finally, it was time to head back to the What Stage for the Friday night headliner Radiohead. Here we made our first rookie Roo mistake and totally misnavigated the overwhelming crowds. We were promptly all separated, not to be reunited again until the end of the night. Mike and I stuck together and once we settled into a good chill watching spot, I really enjoyed it. I am admittedly not the biggest Radiohead fan in the world, but they put on a great live show.

After Radiohead, I needed to get my dance on something terrible. We wandered around a bit and I was drawn towards the “This Tent” by a recording of Daft Punk’s “Harder, Better, Faster, Stronger”. We realized that Major Lazer was just about to start so we grabbed our glow sticks and proceeded to get our groove on.

Let me just say that Bonnaroo at night is like raver’s paradise.

We wandered around a bit more and caught approximately 45 seconds of this belly dancing performance before deciding to call it a night. I was FEISTY!

Disclaimer: I understand there are stereotypes about the kinds of activities that occur at music festivals. I will not comment on anything I saw, but I will clearly state here that I do not and did not use any illegal substances of any kind